The problem of rising damp and what causes it

What is capillary rising damp?

Rising damp, also called capillary ascending moisture, is the ascent of groundwater in the form of moisture through capillaries in masonry.

It is a continuous and steady flow of water molecules that rise through the porosity of the building material, drawn upwards from the moisture in the ground.

Despite the force of gravity, the moisture is drawn high up in to the walls, exceeding, in some cases, two meters in height. Rising damp is the main cause of mould, musty odours and salt crystals in the walls. 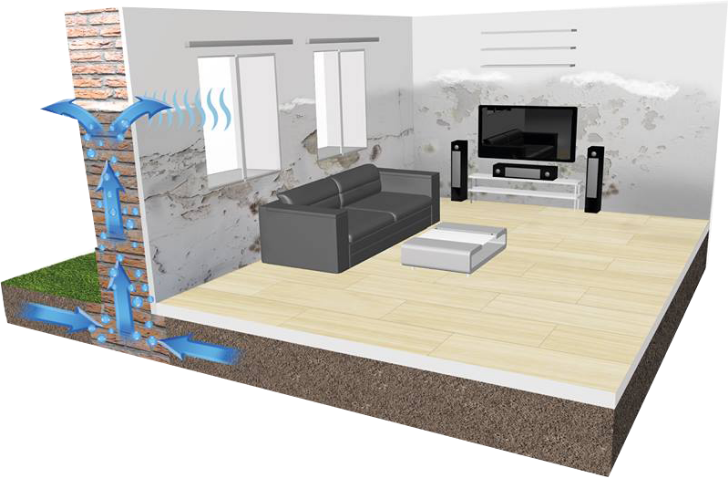 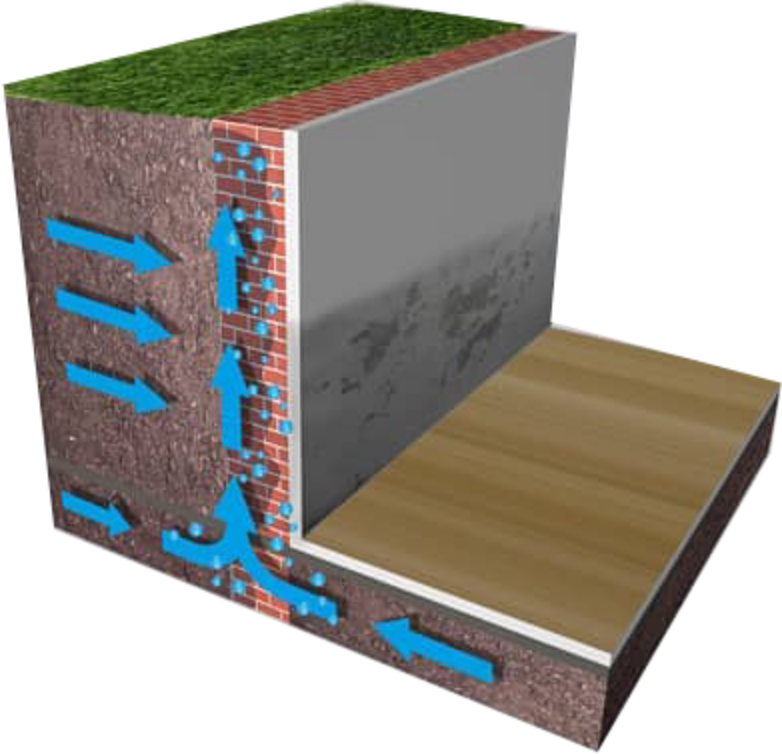 What are the causes of rising damp?

Capillary rising damp is a problem present in walls which are in contact with the ground of buildings which have not been adequately waterproofed. Typical signs of rising damp is the separation of paint and plaster and the presence of white salts on the walls. The unpleasant smell of damp inside the room is very often noticeable and less frequently, black mould is apparent. It is the lack of waterproofing within the building which allows the water molecules in the ground, to penetrate the walls and rise through the masonry. The reason why water rises through the walls is connected to a natural phenomenon – Adhesive Force. This adhesion causes the liquid to cling to the surface on which it rests. Furthermore, it allows water molecules to adhere to other materials. Every wall absorbs the moisture in a different way because of the different material or the construction technique used but additionally, Earth’s naturally occurring magnetic field creates an electric disturbance within the building structure, exacerbating the pull of the moisture upwards through the wall.

What are the consequences of rising damp?

Measuring the Electrical Potential in a wall with capillary rising damp, shows it is charged like a battery. This phenomenon of electrical unbalance occurs inside the wall and displays the electrical potential within a range that can vary from 50/60 mV to 400/600 mV. This current is higher in the low part of the wall and diminishes higher up the wall until it reaches zero.

Other causes of electric disturbances are factors naturally existing in the ground, such as stray electrical current, anomalies of the magnetic field, the underground flow of water in the stratum or less frequently, electromagnetic waves emitted by external energetic sources. Electro-smog is the invisible electromagnetic radiation resulting from the use of both wireless technology and mains electricity. These include radio waves, high tension pylons, underground electrodes and electrostatic currents.

One of the consequences of rising damp is that the moisture in the walls disperse into the room by evaporation, creating unwanted, increased levels of humidity in the air. A more serious concern is the presence of volatile mould spores held in the moisture which are then dispersed into the air. Breathing in these spores increases the high risks of contracting different pathologies such as colds, allergies or respiratory infections. In addition, it causes bad odours within the room. At this point the quality of life and health within our home has been compromised.

There is also the aesthetic issue of loosening wallpaper, crumbling plaster, paint deterioration and other problems. Even if these problems are addressed with remedial renovation, the rising damp will continue to deteriorate the walls and the problems will reoccur as the true cause of the damp has not been tackled. In addition, the walls affected have a reduced insulating capacity, causing considerable heat loss which subsequently, increases heating costs. Biodry Technology system stops the rising flow of moisture, allowing the walls to dry and to be permanently restored.

In the highly unlikely event of unexpected results over 3 years, we offer a refund of 70%. (Engineer site evaluations and work are non refundable)